So when your hearing begins to decline, and for most of us it will, it can take away from your quality of life. The fact is, hearing loss doesn’t just affect you physically. It can impact your emotional and social health, too.

Many people chalk these symptoms up to old age. But in truth, hearing loss occurs in every age group. It’s especially important to catch hearing loss in children since healthy hearing is so essential to language development and learning skills. But adults young and old also need to watch for signs of hearing loss so they can make the most of their quality of life.

Anatomy of the Ear

The ear is made up of three parts: the outer, middle, and inner ear.  All three parts of the ear are important for detecting sound by working together to move sound from the outer part through the middle and into the inner part of the ear.  Ears also help to maintain balance. 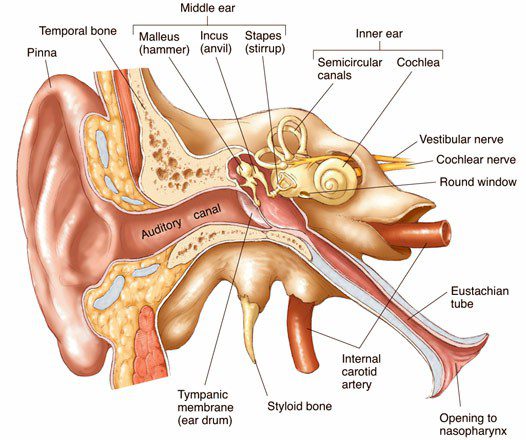 When the stapes moves, it pushes the oval window, which then moves the cochlea.  The cochlea takes the fluid vibration of sounds from the surrounding semicircular ducts and translates them into signals that are sent to the brain by nerves like the vestibular nerve and cochlear nerve.

The outer part of the ear collects sound. Sound travels through the auricle and the auditory canal, a short tube that ends at the eardrum.

Sound entering the outer ear travels through the middle ear and causes the eardrum and ossicles in the middle ear to vibrate.  As it travels, it amplifies (becomes louder) and changes from air to liquid.

Diseases and Abnormalities of the Ear

There are a number of different infections, diseases, and even cancersthat can affect the ear and ultimately lead to hearing loss. These conditions include otosclerosis, otisis media, and Ménière’s disease.

The decibel is a unit of measurement that indicates how loud a sound is. The higher the level, the louder the noise is. With increased decibel levels and longer periods of exposure, the risk of permanent hearing loss increases, so it’s important to limit exposure through hearing protection and avoidance of loud noise. Children are especially susceptible to permanent damage as they are developing, so each year, the Sight and Hearing Association releases a list of noisy toys that exhibit dangerous decibel levels.